Recipients of the 2012 Schmitt Prize: Tony Parker and Vince Riley 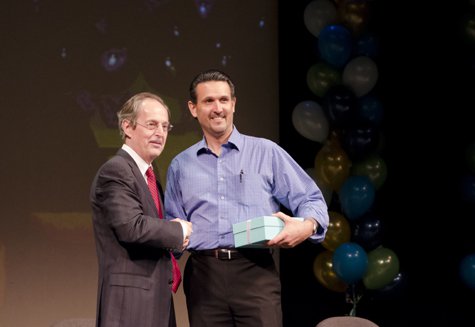 Tony Parker is a project manager in Facilities Design and Construction who is described as "reliable" and "demonstrating high standards." Tony is a creative problem-solver whose professional approach and work ethic make him the ultimate project manager. His work in programming and predesign are well known, and he is frequently requested for campus projects. His contributions to the campus are visible in projects such as the Schlinger Laboratory. In the area of customer service, he keeps everyone informed, anticipates customers' needs, and has the ability to manage difficult situations with great diplomacy (some would say we could use his skills on a global level). Time and again, it has been mentioned that Tony goes out of his way to help and encourage coworkers to do their best work. Outside Caltech, he actively supports his children's activities.

Excerpts from the nominators' comments:

"Since becoming a project manager, Tony has made significant contributions to the campus community. His professionalism and commitment to customer service have earned him the respect of faculty and staff throughout campus."

"Tony is a team player and extremely helpful to both management and to employees. For example, he knows the challenges and understands the requirements needed for custodial staff to prepare a building for opening after new construction or a rehab project, and knows how to manage difficult situations with faculty. Tony's commitment and attention to detail is appreciated by all who have worked with him."

"Tony focuses on every aspect of a project-from big picture to small detail. His skills are matched by his positive personality, which brings much relief to the pressures of having projects done on time and within budget."

"We have had several new employees in the time I have been here, and Tony also steps up to assist with getting them comfortable with our office and our campus. He is truly just a nice guy, in addition to being an extremely accomplished project manager." 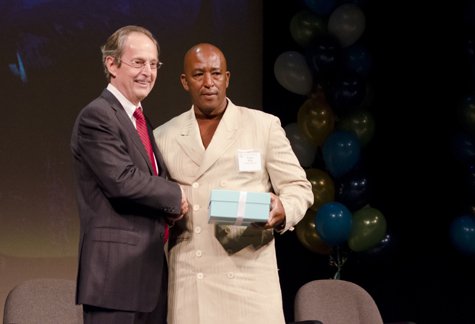 Vince Riley began his career at Caltech when he was just 15 years old. He started in the plant maintenance department of Physical Plant as part of a summer program in 1978, and three years later he began working full-time in the custodial department. In 1991 he became a senior building supervisor in the physical education and recreation division of the athletics department. As the Caltech athletics ambassador, he takes pride in his job and loves his interactions with faculty, students, staff, and other members of our community. At present, as for the last two decades, Vince exercises a leadership role in organizing the daily functions of the athletics department. He has innumerable responsibilities and is an example of an unsung Caltech employee whose conscientious, intelligent, and dedicated service is what makes this university special. In 2011, Vince was honored with the staff appreciation award for services to our student athletes. He is known as the Caltech club football team's six-time award-winning running back who participated in the team's only undefeated season (1985) and who still holds the record for the longest run-a 96-yard touchdown.

Excerpts from the nominators' comments:

"Vince always greets us old-timers when we arrive at the gym and extends a friendly hand to shake. He's lasted a long time in his job, under many athletic directors, and maintained a cheerful, upbeat manner through it all. Lots of us would be glad to see him win some recognition for his loyal service."

"Vince has innumerable responsibilities, and he is an example of an unsung Caltech employee whose conscientious, intelligent, and dedicated service is what makes our Institute very special."

"Not once can I recall a time when Vince wasn't asking to help before I asked him to help. He is very flexible with his work schedule, so he is here for our busier athletic events. Whether he needs to be here on a weekend or late into the evening, Vince has always adapted to the needs of the department in a professional manner."

"As a user of Caltech's gym facilities, I have long been impressed by Vince's diligence and work ethic. He has always provided his assistance to the users. Many times, for example, if he notices the towels run out, he will send some directly to the users at the gym area. Maybe no users in the gym know his name, but he has always been glad to help you as if you were his friend."

"Vince's attitude, I believe, is one of the reasons why his coworkers at the gym always seem to be in such a good mood. And, more important, it is also one of the things that helps attract all sorts of people into the gym and helps make it one of the rare places on campus where people of all different backgrounds talk to one another and socialize with one another."